Convinced that worshiping in English would draw more people to Lutheranism, a group of 40 German-Americans established an English-language mission church in south Minneapolis. In 1909 it became Mount Olive.

Although the congregation became a part of the conservative Lutheran Church—Missouri Synod, it retained a progressive outlook that later proved important to its story.

Almost immediately, the new congregation purchased property at 31st Street and Chicago Avenue and began constructing its first home. In 1921, the Rev. Theo. H. Schroedel became pastor and, over the next four decades, built the congregation into a force in the synod and community. Construction on a larger church was finished in 1931. That church stands today. 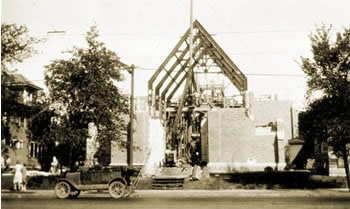 Construction of the New Building, circa 1930

Like many mainline congregations, Mount Olive grew rapidly in the postwar years. An education and office wing was added in 1957. Schroedel, meanwhile, emerged as a leader in a national movement to liberalize the Missouri Synod. And Paul Manz, Mount Olive’s first cantor, drew worldwide attention for his compositions, organ improvisations, and innovations in congregational singing.

The arrival of the Rev. Alton Wedel in 1961 led Mount Olive deeper into the social ministry and ecumenical movements of the 1960s. Finally, in 1976, came a dramatic split: Mount Olive ended its 67-year relationship with the Missouri Synod, leading eventually to its joining the Evangelical Lutheran Church in America (ELCA), North America’s largest Lutheran body, formed in 1988.

In recent decades, Mount Olive has continued to sharpen its focus:

Click here to order this book about Mount Olive’s history.